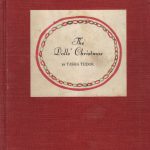 The house is decorated, the tree sparkles in the living room, the dining table is set festively for upcoming gatherings, and the playlist is poised. Balsam scents the rooms and angels preside from their perches. But this year we have special visitors who seem to have taken over the den and the guest room. I wouldn’t be surprised if they’ve been tiptoeing around while I’m not looking, arraying themselves throughout the house. This just might be the dolls’ Christmas.

It started when I opened that Box of Dollies (see post) my mother had kept for me. Once I opened that box, things began to shift. First, the dolls brought with them more memories than I could have fit into a decade of journals. They all wanted to spill their tales at once, so I had to remind them to take turns. The international group also had to be reminded to speak English or French or Japanese so I could understand them. My, what wonderful accents they have: Jamaican and German, India-Indian and Russian, Swiss and Brazilian. Many of this group are dancers, and their joints are a little stiff, so I’m sure they’ve been remedying this by leaping from the box and running exercise classes. In fact, that explains the faint music I’ve overheard coming from downstairs.

The baby-doll and tiny-tot group behave all together differently, as one might expect. Bilo Baby with the smooth china head and long Christening gown just wants to be held: if over the shoulder, her eyes stay open; reclined in the crook of my arm, she closes her eyes and drifts off to sleep. She’s been behaving this way ever since her original owner, my mother, held her and demonstrated her proper care.

Brenda, though, is another dancing fool. She’s the same height that I was when we first met, and once her feet were strapped to mine, we’d dance eye-to-eye, her yellow yarn hair mingling with my long auburn tresses. She wore a dress in those days, but somehow, while living in the box, she managed to wiggle into one of my old outfits: my family tartan kilt, paired with a Tyrolean sweater and knitted cap. The outfit doesn’t match, but it sure looks festive in an international way.

When all these visitors from my past showed up so suddenly, I wasn’t sure at first what to do about their accommodations. Our grand daughters pronounced them “weird” during a recent visit, so evidently their charms don’t translate to a generation already too cool for dolls, unless they happen to be dragons. To be fully appreciated, dolls require the supple hearts and minds of the youngest citizens available, which is why several of the youngest looking dolls are packing for a trip to Virginia where they’ll take up residence with two tiny cousins.

Meanwhile the international group are being vetted for membership in a professional group that may involve shows, travel, and a certain amount of fame, as befits their status and legacy.

During final preparations for the holidays, I took from our storage shelves a red basket filled with favorite seasonal books: A Christmas Carol, How the Grinch Stole Christmas, and other treasures. It was when I came across the last book in the collection that I knew I’d been right about this year’s theme.

It’s a small, cloth-bound volume whose red linen has faded slightly. It’s filled with watercolor illustrations of two young girls who carefully dress their dolls and bring them to a Christmas feast. The girls in the picture book resemble my sister and me back in the day. They also look so much like our pair of sibling granddaughters just a few years ago. And they look a lot like how my little cousins will look in the next few years. I’d forgotten all about this little book, which brought back another flood of memories.

I had to place it in the front of the red basket this year, for it announces our theme. The title is The Doll’s Christmas.