';
To receive newsletters from my heart to yours... Enter your email address
January 20, 2022 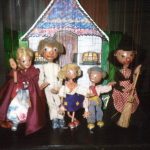 “Strings attached” usually has a negative connotation. The good news is, yes, you’re receiving a gift. The bad news is, no, it’s not exactly free, because it comes with “strings”, or conditions. You can borrow the car is you don’t drive over 55 miles per hour; you can stay rent free if you do all the yard work; you get the idea.

Sometimes, though, strings are the very things that make the magic happen. Such is the case with marionettes. Unless they had strings, they’d just be immobile dolls. With strings, they seem to move as if by magic.

I was introduced to this concept at a very young age. We all believed in Santa at our house, and he appeared without fail after my sister and I reluctantly went to bed on Christmas Eve. Of course, we bounded out of bed at the crack of dawn Christmas morning, raced down the hall in our feet pajamas, and discovered a glowing tree festooned with favorite ornaments and replete with presents crowding its skirts.

But one Christmas, there was more. That morning we couldn’t seem to get our bedroom door open, and through it, the voice of our dad was heard to say that he and Mom had been given a couple of extra jobs by Santa and that we’d be let out soon. I don’t think we totally destroyed the springs on our twin mattresses as we bounced on them for the next hour. Finally, we exploded out the finally-opened door and when we arrived at the living room, beside the tree stood a full-fledged puppet theatre.

Oh, the squeals of delight and discovery, as we thundered up the hidden steps to find our beloved marionettes each had a special place to “hang out” backstage. Oh the scripts I wrote every day to be performed every evening. Oh the musicals I wrote and performed, with my sister’s able assistance, every weekend. Our theatre was an endless source of joy, and no doubt helped two little siblings to grow into professional performers, producers, and writers.

Eventually, these lovely puppets were packed away and journeyed (as did My Box of Dollies) back to America. Years later, when my nephew was a tot, Mom and I dragged out the puppet box from her storage room. Always eager for a theatre project, Mom and Dad decided to resurrect a simpler version of the astonishing and amazing puppet theatre they had built for my sister and me when we were tots. This time, the theatre would be far more modest, but it would serve as the centerpiece of a Christmas puppet show and party for their grandson and the grandkids and children of neighbors and friends.

Mom and I organized a puppet spa where our clients got their faces washed and their clothes pressed. Pere (a real engineer) reopened the doll hospital where he and my husband (a real doctor) performed surgeries and repairs, as needed. The rejuvenated and restored puppets then took their places backstage, awaiting such time as the curtain would rise on their upcoming performance.

Our puppet cast members, who reminded me they are actually marionettes, were having their own backstage dramas, not least the butterflies in their wooden tummies at having to memorize lines again after such a long hiatus in their tea box. Mom (a real actress and costumer) reassured our cast who, when they looked in the backstage mirrors, were greatly reassured by her deft techniques.

The playwright (myself, a real writer) prepared the scripts and Pere (a real director) did the blocking and gave our stringed actors just the coaching they needed. My sister and I (real actors) lent our voices offstage as needed. (Did I mention I come from a theatre family?)

When guests arrived, beautifully dressed children with parentals and grand-parentals in tow, they giggled and wiggled their way to their seats, then sat quietly, mouths agape, the moment the curtain opened. Entranced by the onstage dolls that seemed to have come to life, they shouted out their worries when the princess was in danger from the witch, or hurrahed the prince when he rode in to save her. They clapped along when Minnie and Mickey danced a jig, and they laughed when the princess impatiently tapped her foot and cocked her head.

That holiday season, we brought the magic back out of those boxes. But it occurred to me as I reflected on these sweet memories, that we couldn’t have gotten anywhere with the whole project if we hadn’t been able to untangle the marionettes’ strings. Of course, they’d been carefully wrapped when Mom had packed them in the first place. That was an expertise of hers. Yet somehow, jostling their way across the wide Pacific, then traveling overland from the coast to the mountains, those strings had managed to twist and tangle into almost unrecognizable masses of delicate colored lines.

Maybe there’s a knot of resentment that we could untangle with a bit of patience and forgiveness. Perhaps there’s an interlocking loop of mistaken communications that could be smoothed with a phone call or a note. Or it could be that a few moments of stillness—a walk in the woods, down a street, or along a beach—would allow us to relax the tension on those strings and let them disentangle and unfurl like strands of kelp in a gentle tide.

Once we’re untangled, we can feel our connections better. Are we uncomfortably tied to unwelcome manipulations? Or are our only real ties to the beneficent requirements of the Universe, which has a unique place for us and demands only that we perform as our best selves? Maybe I’ll let the Universe yank my strings in the new decade. After all, when our marionettes’ strings were smooth, they could do almost anything: walk, run, bow, curtsey, shake hands, high-kick, and even fly.