';
To receive newsletters from my heart to yours... Enter your email address
February 29, 2020 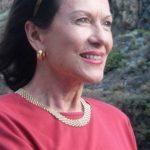 One month after my mother’s passing, I had an unusual experience. Was she really gone? Or was she still here in a different way? My parents called their home Purlieu, a lovely play on words that means “Purl Place,” and also means “haven.”

Wind rustles through the trees at Purlieu, tall and graceful, grown from the saplings she planted years ago. Her yellow lilies still brighten the terrace, though half the blooms are wilted, now. The stillness that has fallen over the house invites more careful listening: maybe I’ll hear her voice once more. If I do, will it be memory, or visitation?

Their bedroom, the hub during her illness and transition, is downstairs. Overhead, the sumptuous living room still beckons, with its wide veranda and spectacular view. “Vista Grande” reads the address—the special aspect that first sold them on the house that was to become their final and most evolved home.

The hardwood floors upstairs, polished and gleaming, squeak, despite the adornments of specially woven Oriental rugs. “Nightingale floors,” the ancient Japanese named the smooth walking surfaces of their castles, designed to alert residents of intruders. I hear a footstep now . . . no, it’s just the house itself speaking, perhaps whispering her name.
We take turns, as we did during her illness—my sister, myself, my husband, dear friends. Now we do it for Pere, who has lost his partner of seventy-two years. Struggling to get on with things by day, and mostly winning the battle, at night he’s by turns lonely and fearful. So we work together on the next project: Mom’s Memorial.

Projects have always been a way of life for the Purls. Sometimes a bane, sometimes a boon, projects define our time and express our various core purposes. That’s what I’ll miss the most, I think—that I won’t get to do the next project with Mom. A few years ago, she and I prepared her kimono collection for a gallery showing and sale. After fifty years of gathering these rare silks with their classic designs, outrageous colors and fascinating histories, she felt it was time not just to let them go, but to share them. We photographed each piece, created special provenance tags and wore our favorites for the scores of guests. Like squeezing dye from the silk, the hours of work we spent pressed out of her myriad stories that color my remembrance.

This evening it’s just Pere and me at Purlieu. And I’m doing a project: completing the stack of thank you letters to donors who contributed to the Conservatory Studio in their name. The letters are printed; both Linda and I have signed them. But we thought there might be something more, and we decided to add Mom’s hanko. The ancient custom of pressing a seal into wax or ink adds a touch not only of beauty, but of authentication to important documents. The stamp itself is carved in marble; the ink pad is rich, gooey crimson; the seal becomes an intaglio at the bottom of the page, balancing the red initials at its top on the stationery I’d ordered for her.

I array the first twenty sheets of ecru paper on the carpet near her desk to allow the ink to dry. I examine the small, cushioned, fabric-covered box into which the marble stamp fits. In its bottom I find a small, delicate square of rice paper stamped with the vermillion design: two characters, side by side. Beneath each one, English letters are printed in her hand: MA SHI, and beneath these, “wind, feminine” and “stone, strength”.

It’s the meaning that resonates first. “Shi”, pronounced “she” in Japanese, I recognize as the word used for “stone lantern”—“ishi toro”—three of which stand sentinel at Purlieu, one of which is illuminated now, in the darkened garden. And a stone is a metaphor for strength. “Ma” is a syllable I’ve studied in several languages, since it’s the first sound in my own name.

Words come with meanings . . . meanings come with words. I gasp. I realize, now, this is a double translation. Using the sound of her name “Marshie,” she’d asked a calligrapher what characters might be spoken with those same sounds. Since Japanese characters sometimes have more than one pronunciation, this would require a creative approach. But the calligrapher found two symbols that could be pronounced “Ma” and “Shi”—a close approximation—and had made sure to find characters that also contained meanings that would synchronize with her spirit.

A gust of wind comes through the sliding glass doors, though they are closed, and riffles the papers. “Wind”—considered a feminine element . . . the first part of her hanko. She’s here, signing her name to the letters in metaphor and symbol. I stack the papers, but before leaving her desk, I open a drawer, not knowing why. My hand touches a spiral steno pad—perhaps something I can add to the recyling bin as we slowly begin to clear the house of her things. But when I open the notebook, it’s filled with her writing, line after line, in pencil: a journal I never knew she kept.

I help Pere get to bed. “I’ll be upstairs,” I reassure him, “just in case you need me.”
“Good night, dear,” he says, the wistful tone a grace note to the rustling trees. I tiptoe upstairs, carrying too much: the letters, the notebook, a tray of dishes, two pillows. As I arrive in the kitchen, one piece of papers slips out and flutters to the floor. A few moments later I come back to find it.

The page begins with an asterisk and notation: “add to page 67.” The subject of the page takes my breath again. Not that I didn’t know the story, for she’d told it to me all my life. “We’ll name the baby Ma- from me, and Ra- from Ray,” the familiar story of how I received my name. But to find it here, now; for me, her word-daughter, to find her word-message, the message embedded in our very names. . . .

The veil separating mortality and immortality seems thin, now, as thin as the rice paper stamped with mother’s beautiful hanko. Worlds intersect, one nexus at the stone lantern, another at the drawer of her desk.

But perhaps the geometry is far more complex: not straight lines that only touch once. The universe is silken threads intertwined in endless spirals. I tug at the end of a double helix DNA strand, and realize I’ve grasped the edge of a galaxy.