';
To receive newsletters from my heart to yours... Enter your email address
August 11, 2022

A Year for Mom: Preparing for the Big Day 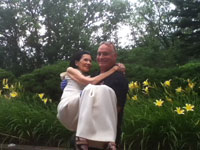 “A Year for Mom” is a collection of posts written during 2013, the year of my mother’s final illness and of her passing. Some of the most heartfelt and extraordinary communications I’ve ever sent or received took place during this challenging year. I feel I learned so much that ultimately it was as much a year of gain as of loss. Many of my friends and readers have expressed a wish that I share my experiences. These personal moments are shared . . . from my heart.

Mom’s birthday began early. It was a gloriously beautiful dawn in the Rocky Mountains and the parental home shone with its collections of treasures. Outside the master bedroom’s sliding glass doors, the yellow lilies Mother had planted years earlier now unfurled their petals, carefully cut ribbons of sunshine that bordered her yellow and pink boudoir.

She’s a little slower, now, with the simple ablutions, which have become tender ministrations by my sister and me. And for this 90th day, there would be my sister’s deft hands performing a professional make-up and hair session, a further extension of yesterday’s visit from the Buddhist-Priest-Manicurist whose magical appearance in our lives Linda recounted in “The Guardian.” So now, Mother’s fingertips and toenails glistened with a pearly luminescence, a quality that seemed gradually, quietly, to be overtaking her entire body.

My sister and I made a seamless transition, as she left for the theatre and I took over the task of getting Mom dressed, aided by her long-time assistant and care-giver, Matthew. Her white-wool-couturier-long-skirt-jacket-and-halter-top was the outfit she’d chosen, and to the neckline she’d added one of her signature beaded collars, which completed the outfit with a subtlety of glistening sparkle.

The logistics of donning this outfit were, however, worthy of a sophisticated architectural plan. Mostly confined to the hospital bed that Hospice had brought into the room, she could no longer stand under her own power, and even with help, her feet tended to scoot out from under her, and her bird-like arms wouldn’t help much. Still, where there’s a will—or in this case, three wills—there’s a way.

We had her bed angled so she could sit up. On her left side, I stood with my legs wedged between it and the edge of the king-sized bed she’d shared with Pere all these decades. On her other side, there was just room for Matthew to squeeze in beside the ornate Korean night stand and the incongruously modern rolling table that now held some of her care giving necessities.

To avoid smudging her perfect make-up, and with her enthusiastic permission, we cut away the favorite gray sweatshirt emblazoned with the YALE lettering, cherished as a memento of those halcyon days when she pushed my pram and listened at the windows to our father’s professors at Yale Drama School. It then took us fifteen minutes to get the bra fastened, its “easy front closure” a diabolically uncooperative device.

Now we began working on the halter top, beautifully designed to fit her sleek body, but with a back zipper that had to be joined at the bottom before it could be drawn up and closed. Alone, neither Matthew nor I could leverage ourselves between the forty-five degree upper portion of the bed, and her frail body so as to start the zipper. And with one of us holding her and the other trying to work the garment, we found we needed a third set of hands to bring the two sides of the fabric close enough.

Though Mother remained cool and collected through these machinations, sweat was pouring off both her helpers and our arms had begun to shake from the strain of holding her in place while struggling with the clothing. “Let’s each take one side of the zipper,” I suggested, speaking quietly so as not to alert Mom to any problem. So now, one-arm-each holding Mom erect, we reached to the nethermost region where Mother-met-mattress to fit together the two parts of the world’s tiniest zipper.

My curlers began to come unfastened and hair drooped across my line of sight. We tried again, the male side of the zipper not seeming to find the female side. It was when Matthew asked, “Is it in yet?” that we both began to shake again, this time with laughter. Unable to keep the laughing completely silent, we then noticed Mom was laughing too, though an occasional gasp indicated we had to finish this task before we exhausted her with discomfort. It finally worked. And then it took only another ten minutes to hold together the two sides of the fabric closely enough for the zipper to close.

No rest for the wicked, we now had to wrestle with the full-length skirt. Matthew swung her legs over the side of the bed and levered himself into position. Once the skirt was pooled around her ankles and we’d carefully placed her feet inside the circle, he hoisted her upward, while I pulled the skirt over her hips. But three-quarters of the way home, Mom began shouting that something hurt. “What?” we wondered desperately. She couldn’t explain, nor could we hold her up long enough for me to get the skirt fastened.

Now I was wedged between Mom and her hospital bed, and there was no time to escape before Matthew had to let her fall back, to get away from whatever was pinching her, and to allow all of us a momentary reprieve from our exertions. Mom and I collapsed backward across the bed. She was now comfortable. I was now pinned. Matthew was now rethinking the logistics. How we disentangled ourselves I’m not entirely sure. But after a quick breather, I somehow managed to thrust myself and Mom upward enough to slide myself out of the way, and let Mom sit on the edge of her bed.

At this moment, the driver of the medical service company van arrived to take her to the performance that would start in forty-five minutes. The man was only a little late. Somehow I’d throw on my clothes and follow the van down the hill, and Matthew would do the same, as his duties would switch to transporting Pere to the venue.

I said to the driver, “Great. You can bring your team downstairs, now, and I’ll show you the best route for carrying her upstairs.”
“Oh, but it’s only me,” said the driver.
I looked at him in astonishment. “That won’t work,” I said with as much patience as I could muster. “As we explained on the phone, you need a team of three.”
The poor man stood like the proverbial deer in the headlights.
“Make whatever phone call you need to make, and make it now, I said. The curtain’s at two p.m. and my parents will be sitting in the front row.”

While Matthew kept Mother from sliding off the edge of the bed, I dashed upstairs to the guest bedroom to rip out the rest of my curlers, fling on my dress, and throw my high heeled sandals into my car. I opened the garage door just in time to see a football-stadium-sized fire truck pull into my parents’ circular driveway. Like Super-Heroes, three handsome young men and one fearsome female beauty leapt from their vehicle. “How may we help you?” they asked, arms akimbo, well-toned bodies aquiver with readiness, expressions focused with expectancy.

“It’s my mother’s 90th birthday, and this will be her final outing. We need to get her from the bedroom to the van. Follow me.”
Down we trouped to the lovely bedroom, where we found Mother in Queenly splendor sitting perfectly composed and ready.
“Mom, our favorite heroes are here,” I said.
“Goody!” she proclaimed.

The four paramedics took in the surroundings, and the sight of the delicate, bejeweled woman in front of them. They’d been here on other occasions, when she’d fallen in the night. She’d been vulnerable and sweet, then, a frail older woman. They were unprepared for the Monarch they met today. And yet, these people are always prepared. “I’m just going to carry her,” said the Captain. And now the procession exited the sliding glass doors with mother in the sturdy embrace of our Hero Captain, followed by his trusty team. In moments, she was deposited in her chariot. Minutes later, we began our procession of vehicles down the hill to the Conservatory, where a performance, a party, and a surprise awaited her.

Some weeks ago she’d had a late-night vision. Two handsome men had come to her sliding glass door to take her somewhere. “I told them it wasn’t time yet,” she explained to my sister and me. I wondered, now, whether her time had come.