In today’s post, I’m hosting author Roger Seiler on one of the stops along his Blog Tour. I’ve been the guest of some marvelous Blog Hosts during my own previous tours, and was delighted to be host to such an accomplished person as Roger Seiler. Enjoy! 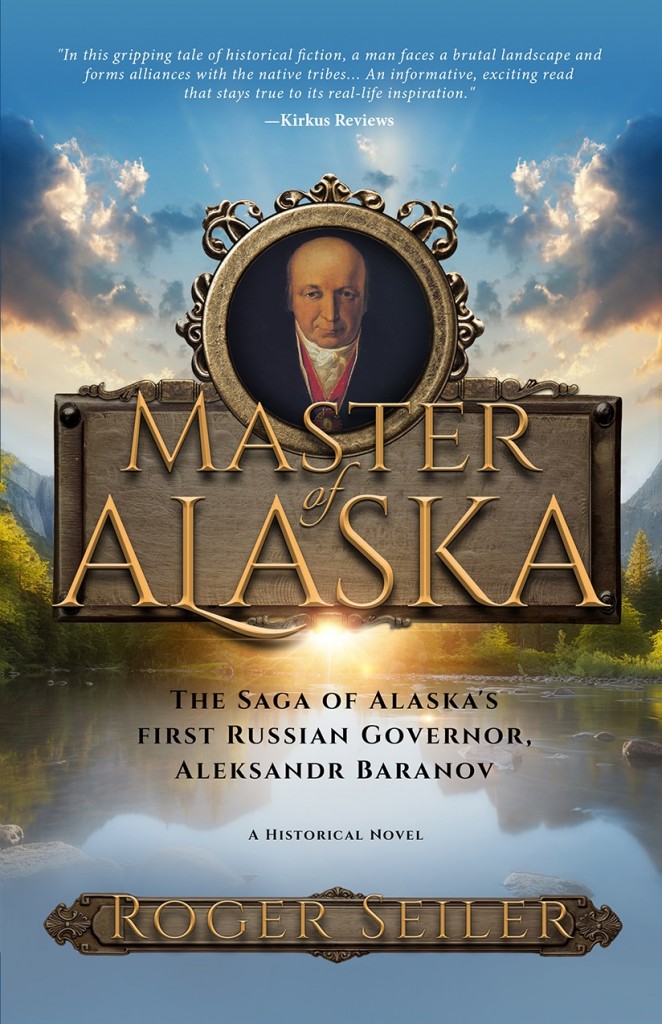 Roger Seiler’s new book is the perfect read for anyone interested in history, particularly about the storied expanse of lands and archipelagos connecting the northernmost regions of Russia and Alaska that stretch like a taught sinew between and across time and cultures.

Eons earlier, we read, Native Peoples traversed these land-water bridges to travel southward, branching into groups that became the Tribes of North America. But as the new nineteenth century was about to dawn, nations were vying for control and supremacy over the bountiful north. And only the strong could wrest treasure from such a forbidding terrain. Into territory first conquered by the Aleuts and the Tlingits swept the wily, intrepid Baranov, the protagonist of the story, whose adaptability became even more important than his braun.

Seiler is a master of research, digging out treasures and piecing them together like a three-dimensional puzzle through which his readers can walk as though time-traveling. Written in muscular prose that seem to echo the brusque bravado of his characters, his book walks us through an era we could scarcely imagine today, as we view Alaska from the deck of a cruise ship, or through the flap of our tent. For though today’s Alaska retains much of its rugged power and raw beauty, most of us are not forced to wrestle with the elements without respite as were those who tread these grounds in earlier centuries.

Each culture and time has its currency, and in that time and place, it was the lush pelts of sea mammals. “It occurred to Baranov the businessman that,” writes Seiler, “if he could develop a method for controlled hunting to stabilize the supply of furs, it would ensure long-term profits. ‘I need a scientist to help me figure out how to balance otter hunting with reproduction rates. In the end, it’s all about profit.’ ”

We may think of ourselves as the originators of modern commerce, and of people in the late 18th century as deprived for their lack of everything from airplanes to internet access. But trade routes, balance of power, and diplomatic negotiations all existed at a sophisticated level in the 1790s. The protagonist, establishing a Russian stronghold at the behest of Tsarina Catarina (Catherine the Great) chances to meet a British captain with his American First Mate who reveal that Hawaii—then governed by King Hamehameha—offered great stores of food to those on the Pacific trade routes between America and China; they also reveal the existence of the southern sea otter, a vast population living along the California coast—for the Russian fur traders, whose holds would store otter pelts 1,000 at a time—more valuable than gold. In a further fascinating plot twist, the American First Mate is, in fact, a spy reporting directly to President George Washington.

Flash forward to my new novella, When Otters Play, and you hear the results of this revelation almost exactly 200 years later: the California sea otter populations were pushed so close to the brink of extinction that, for a while, it was assumed they had completely disappeared. Then, as my story explains, in 1938 a small group of otters was discovered living under the Bixby Bridge along Highway 1. Protected by the Endangered Species Act at last, the otters in my story float at the crossroads of a fresh set of political and economic issues, and are sometimes shot, but more often, fought over.

Seiler’s book is a masterful work, a read as densely rich as a high-fat content feast that will leave his readers satisfied, but perhaps also wistful at the pageantry of characters who both gained and lost so much. Their legacies, though, will no longer be lost, thanks to Seiler’s diligent care in preserving history and bringing it to life.

Travel to, and in, Alaska has become increasingly popular in recent years, and from my own travels, I highly recommend the journey. (In Whose Hearts Align, book four of my Milford-Haven Novels to be published in 2018, my protagonist Miranda will be traveling there, during a fictionalized version of my own time in Alaska.) Whether you fly, drive, or take an ocean cruise to our northernmost state, taking along a good book or two can enhance the journey. What a fascinating summer reading plan this would be: first, read Master of Alaska. Then leap forward in time and read When Otters Play to see how some of the historical elements played out. Your heart and mind will be opened to the richly multi-cultural land that ultimately became our 49th state.

And here’s a bonus for my readers. Roger’s book is on sale now – for only short time – for 99 cents! Here’s where to get it:SPECIAL 99 CENT BUY LINK FOR MASTER OF ALASKA eBook

When Otters Play is now available for download as a free Advance Reader Copy. If you send me a comment, it may be included in the published book. The ebook will be on sale shortly. To read more, get special deals, subscribe to my newsletter, find out where I’ll be speaking or performing, and find out all the lastest on the Milford-Haven Novels & Stories saga, join me at MaraPurl.com.